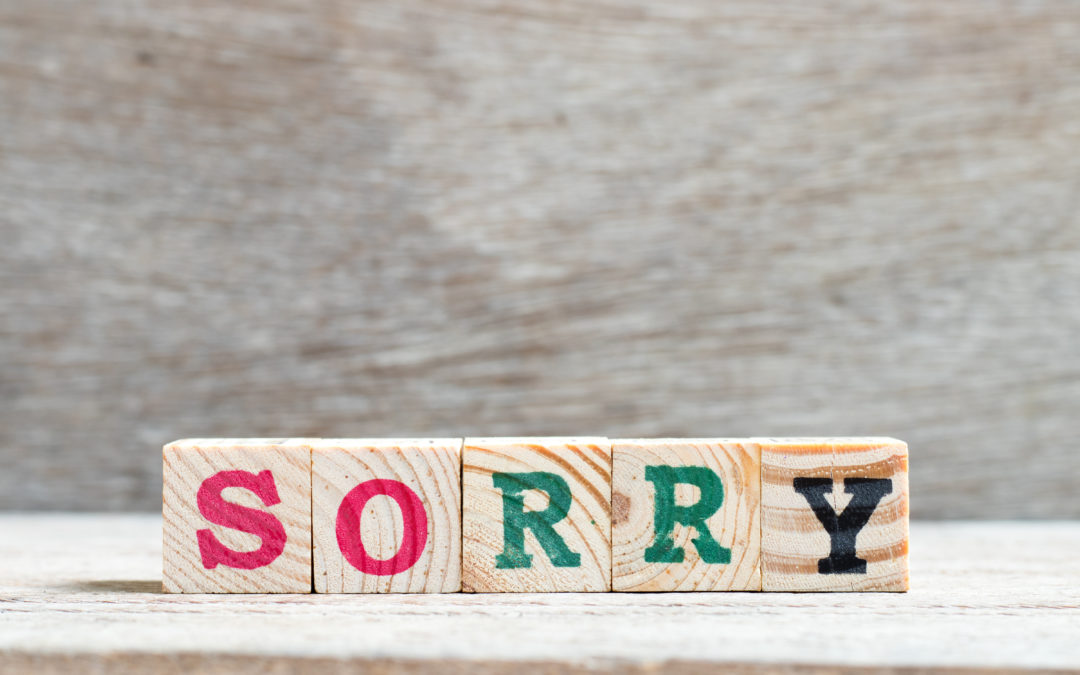 One night we had several leaders at our house for dinner. People were in the living room, the dining room, and the family room. It was loud. People were talking, and we were gathering everybody in for dinner, which we had set up as a buffet.

As people were coming in and talking and as we were pulling together the last finishing touches for dinner, one of my teenage daughters went to the front of the line and grabbed a plate. When she did that, I looked at her and said, “Darling, you know our guests go first.”

Right at the moment I said that, it happened to be one of those times when all the laughing and chatter had suddenly stopped. So it was dead quiet in the room, and all those guests heard me say that to my daughter. My daughter ran out of the room and upstairs to her bedroom.

I Need to Apologize

I called our guests together and said, “You know…. What I just did, I’ve got to go fix. So you all go ahead and have dinner. I may be back tonight, and I may not be, but I’ve got to go take care of my daughter.”

I went upstairs, and she was lying on her bed. I laid down next to her just for a moment. She rolled over and looked at me. I said, “You know, Sweetie, I just embarrassed you in front of all my friends. I just said something loud enough that everybody in the room heard it. And I was so wrong in doing that. And I’m so sorry. Will you forgive me?”

And she immediately said that she would forgive me.

I looked at her and said, “You know, Sweetie, you can hold me accountable never to do that to you again or even to your children one day when you have them. Because that’s something I should never do as a father or later as a grandfather.”

Then, I looked at her and asked, “Is there anything else you can think of that I might have done to you that would impact your life in the future? Because I don’t want you to carry anything harmful that I’ve done in our relationship into your marriage or into your future. I always want you to know that you can talk to me about anything.”

She looked at me and said, “Daddy, not anything I can think of right now.”

I said, “Well, if you think of anything, you know you can always come and talk to me.”

And then, I looked at her and said, “Okay, I’m going to go downstairs, and I’m going to apologize to all our guests who are here. I can do that with you in front of them, or I can do it without you.”

I said, “I know that. But I don’t want them to go home thinking that what I did tonight was appropriate in any way. Because I wouldn’t want them to do that to their children. So would you like to come down now? Or do you want me to do it and you come down later?”

She said, “I think I’ll come down later.”

So I went back downstairs and asked everybody to stop eating just for a moment. I said to them, “You know, almost all of you heard me say to my daughter a while ago, ‘Our guests go first.’ And I want you to know that for me to say that loud enough that you all heard it was wrong. And as I just told her upstairs, I say to you… I am really sorry that I did that in front of you. Because it’s just wrong to do that to your children. I embarrassed her. And I want you all to know that, if I ever do that to you or to anybody else, you have permission to hold me accountable and tell me I did it.”

And then, I said, “Is there anything else I’ve done to anybody else in this room I might need to apologize for?

As I saw their response, I had tears in my eyes because I didn’t want them to go home thinking that what I had done was okay. I didn’t want my daughter to go to bed hurt because her father had made that kind of mistake.

What is the right thing to do when you have made a mistake that you are aware of? The answer? Apologize.

So what is an appropriate apology? Is there a way to apologize that could lead to a change in behavior and save or grow relationships?

When apologizing, I recommend using a six-step apology. My team and I are often told that this tool has saved relationships that appeared to be beyond saving. We’ve been told it has saved unity in marriages, sports teams, companies, and many other types of organizations. Let’s go through the process.

Step 2: Acknowledge that you were wrong.

Use these three simple words: “I was wrong.”

Now, if you were raised in a home where you were told you’re a sorry little son of a gun and that word has a different meaning for you, just say, “I apologize.” Remember not to say, “I want to tell you that I am sorry” or “I want to apologize.” These are not apologies. They are statements that you “want to” but are not going to.

Ask, “Will you forgive me?”

Only you know if you’ve used forgiveness as a way to control and manipulate others. If you have been doing this and have lost credibility as a result, ask the person, “When you can, will you forgive me?” Otherwise, ask for forgiveness on the spot.

It doesn’t matter what the person’s answer is. They don’t have to say “yes” or “no,” but it is important that you ask. Once you have asked, you have done your part. Regarding the relationship, the next step is now entirely up to the other person.

Tell the person who you hurt, “I give you permission to hold me accountable for not behaving this way anymore.”

When we say enough times, “I am wrong. I am sorry. Will you forgive me?” and we give permission for people to hold us accountable, our behavior will begin to change.

Step 6: Ask if there’s anything else.

Ask the person, “Is there anything else I’ve done in our relationship that I need to apologize for?” When you ask that, you’re going to surprise the other person.

Men, if you decide to do that with your wife, know that she remembers far more of the things you’ve done to her than you could imagine. You may not even remember what you did to her last week. So, if you take “Step 6” in the six-step apology, be ready not to respond negatively. Just make a note of whatever she says.

Now, here’s another example of what the six-step apology looks like in action. One of the hardest things I’ve ever had to do is to share with my children something that I did to my wife many years ago.

My daughter called me from college and wanted to come to the Transformational Leadership Training in Orlando with two of her friends.

I said, “Hey, I really want you to come, but if you’re going to come, will you come a couple of days early and just hang out with your old man?” She said she’d love to do that.

The first morning she was there, we went for a walk. And on this walk, I said, “Darling, I have to tell you something, and I’m going to ask you to listen closely and hear me before you respond.” I went on to share with her about my infidelity… my adultery… my cheating on Sandra. I told her how wrong I was and made it abundantly clear to her that none of it had been her mother’s fault.

After sharing with her how I had nearly destroyed our family, I looked at her and asked, “Is there any way you can ever forgive me for almost destroying our family and for what I did to your mother? Because it definitely has impacted you, too.”

She looked up with a smile on her face and tears in her eyes and said, “Of course, Daddy. I forgive you.”

When she said that, I looked at her and asked, “If you ever see me even glance too long at another woman who’s not your mother, would you tell me that you noticed? Would you hold me accountable?”

I then asked her, “Is there anything else I’ve done in your life that would negatively impact anything that would happen to you. I don’t want you to carry anything like that into your marriage that would result from something I have done.”

I then explained to her, “If you or your future husband—whoever he may be—are ever tempted to do something like that, I want both of you to know that you have someone you can talk to before it goes too far.”

To Whom Do You Need to Apologize?

As parents, spouses, friends, coaches, and bosses, we make mistakes. But do we know what to do to rebuild those relationships after we’ve made those mistakes? As I shared with you earlier, we’ve been told over and over that this six-step apology restores relationships. It restores them quickly. So, if there’s someone you need to apologize to, go and do it. And, if at all possible, do this in person.

Take a few minutes and write down a name or some names of people who you might owe an apology. Pick up the phone. Set up a meeting. Write down what you need to apologize for. Then, use the six-step apology, and see what happens in your relationship with that person.

Remember, if you go to someone to apologize, go in love, humility, pre-forgiveness, and total truth.