Using the WADEL Model with a Banker 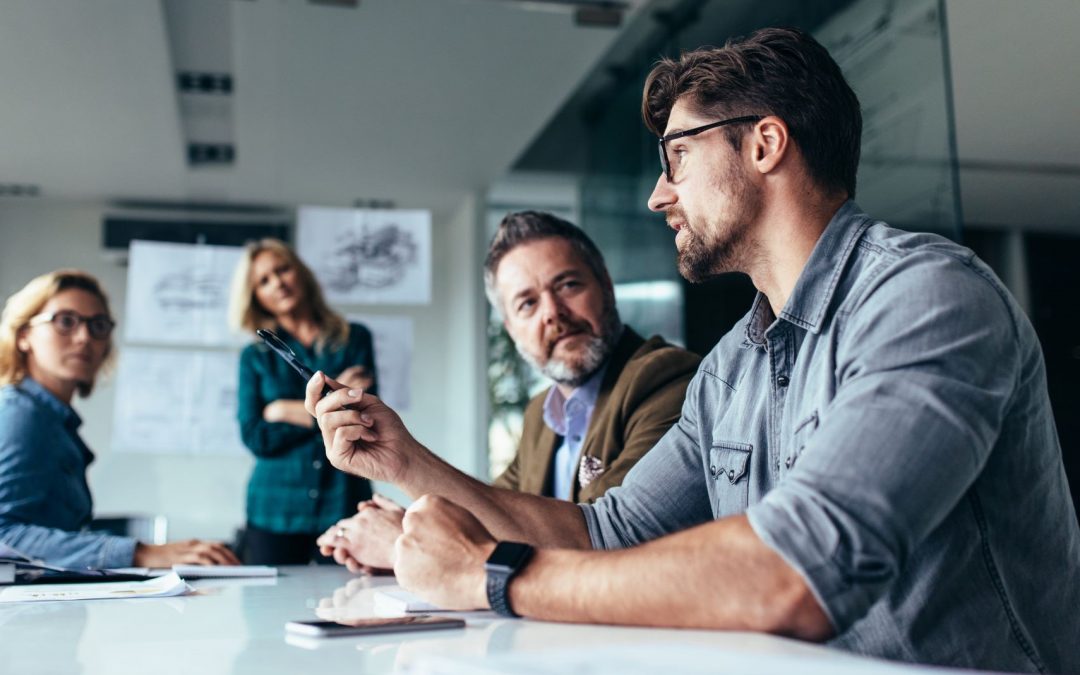 Sometimes we get told by different people your “stuff” won’t work in our industry, that Transformational Leadership just doesn’t work in the real world. We’ve been told that a number of times, but we’ve worked with so many industries and we’ve seen it work in one industry after another. One of the places we were told early-on that there’s no way these tools could work was in the financial or banking industry.

One of these tools in Transformational Leadership is the WADEL model that we use to conduct meetings, whether they are meetings with teams in a corporate office or a family evening meal together around the dinner table. We’ve talked before about the WADEL model and have explained it more fully, but I’d like to just briefly review it for you here and give you a specific example of how it worked in a business setting.

Each letter in the WADEL model stands for an important part of each meeting. The W is the welcome where everyone is welcomed to the gathering and asked to tell something good that is going on. It’s also the time when affirmations can be made to each other.

The A stands for asking questions. Of course, each meeting would have an agenda, but this is the time to ask if anyone has something else that is pressing to them and that they would like to add to the day’s agenda. Even though you may not get to that new agenda item, you can put it there for the next meeting and the person who offered it now at least has gotten it off their minds for the time being and is assured that it will be addressed.

The D means the discussion part of the meeting where the agenda items are clarified and discussed. This is the time when the people gathered for the meeting discuss what they came to discuss.

Finally, the L means launching the people as they leave the meeting with something encouraging to inspire them to do what has been agreed needs to be done. The launch can be a funny story or an inspiring story, something that launches them to leave and act.

With the elements of the WADEL model in mind, let me tell you about a time when, as usual, I used the WADEL model in an important business meeting I was a part of. I was working with a mergers and acquisition company and taking their whole team through the Transformational Leadership training, teaching them all these tools.

In 2007, the president of the company looked at me and said, “Ford, what do you think we need to change about our company in order to be successful long-term? What do you see coming?”

I looked at him and said, “I don’t think you want to hear what I would have to say.”

I said, “Well, the problem is we’re getting ready to go through the worst economic recession we’ve had since the Great Depression. The stock market is going to go down by fifty percent. And in your industry, right now you’re doing really well because the mergers and acquisitions industry is probably doing as well as it’s ever done in the history of America. Because of that, there are many other things that you do that the bankers, the CPAs, and the lawyers have forgotten that you do because you are being so successful in this area. I would start reminding those bankers, CPAs, and lawyers that ‘Hey, if you need this kind of work, be sure and give us a call.’”

Do you think they listened to that? No. Why would they? They were experiencing maybe what was the best economic period in America. Well, what happened the next year? A significant and sharp downturn with a stock market crash by over fifty percent. And, of course, that affected this firm

Climbing Out of a Recession

The chief financial officer of this company called me and said, “Ford, I’ve got a problem. I’m using your WADEL model with our clients and it’s flat not working.”

I said, “Then I’m not sure you’re using it right.”

And he said, “Would you go with me to call on a client?”

I said, “I’d be happy to.” So we went together to call on the bank that he’d been calling on and asking them if they would give him this kind of business that I had told him earlier to go out and start telling banks and others that he could do for them. Now we went to make the call together. This particular CFO had worked in this bank earlier for years, and it’s a large bank. They liked him. In fact, they loved him. And that’s why he’d gone back to them. Even so, they weren’t giving him any business, and that’s why he had asked me to go with him.

As we went together to the bank, we went into the senior vice president’s office in what’s called the “work-out” department. If you’ve ever taken out a loan, you work with the loan department. If you’ve ever gotten delinquent on your loan, your loan could get moved into the “work-out” department. That means the bank wants to work your loan out of the bank. Many companies and individuals had been moved from the loan department to the work out department during this season because so many people were defaulting on their debts. That’s why we needed to meet with the senior vice president of the work out department.

When we got there, he wasn’t there so his administrative assistant took us into his office to wait for him there. Now, if you think about the WADEL model, what do you think we would be doing until he came into his office? For me, it was quite simple. I was looking around at the pictures on his walls. If I’m going to build a relationship with this man, I wanted to know about his family, and I want to know about his co-workers. So I am looking at some pictures to see if I can figure some things out.

A couple of minutes later, he came in and introduced himself. He said, “Hey, my top two work-out guys are going to meet us in the boardroom.”

I said, “Before we go there, could you do me a favor?”

I said, “Could you share with me about this picture?” It was a family picture with a lot of different people in it, and he spent about twenty minutes sharing with me about each individual in that picture.

When we finished, I said, “This picture over here, is this your daughter?”

I said, “Does she play AA basketball? My daughter does, too. Tell me what team she’s on.” So he began to share the whole thing about his daughter.

About thirty minutes into our one-hour scheduled meeting, he looked up and said, “Oh, my! My top two guys have been waiting on us in the board room for thirty minutes. We have to go.”

We walk over there. They are sitting in the room. We introduce ourselves. And, what was the first thing I did? I asked them to tell me about their career here at the bank. I asked questions and made comments like, “How long have you been here,” “I notice you have a wedding ring,” and “Tell me about your family.” That guy spent about ten minutes telling me about his career and family. I turned to the second man. Same thing.

So, about fifty-five minutes of our one-hour had passed, and the senior vice president looked at me and said, “Hang on. Tom brought you here today to introduce you to us to find out what it is that you do that’s so unique and so different from what other consultants like you do, and you’ve not said one word about you or about your organization.”

I said, “That’s really okay. Today I just really wanted to get to know you. Could we set up a second meeting and come back, and I’ll share with you about who we are?”

He said, “Is there any way that in two minutes you can tell me anything at all that would give me some help?”

I don’t have any idea what I said. I wish I’d recorded it, but whatever it was, I jabbered and then, Boom! I stopped. And the senior vice president of this huge bank looked at me and said, “I have a question for you.”

He said about half-seriously, “Can you teach my wife how to love me more?” Now, I found that very interesting. His two employees laughed at him jokingly.

When that happened, Tom said, “Hang on. What just happened here?”

WADEL as a Relationship Builder that Results in Sales

I said, “You all go get your companies, and I’ll explain it to him.” When they left, I said, “Tom, I can’t take any of these companies right now anyway. Okay? I came to get to know these guys and to see if I could help you. I don’t know what I’m going to tell them when they offer me this work, but let’s work on it. You’re showing so much desperation, and you’re using the WADEL model to make a sale. You’re not using it to be in relationship with these men.”

They came back in and piled these companies on the table, and they asked us to go through them. For about forty-five or fifty minutes, we went through a bunch of them. I picked out about five companies that I thought could use the kind of help that Tom’s company did.

I looked at the men and said, “How about these five?”

They said, “Take them all.”

I said, “Well, here’s my problem. Okay? I don’t have the time it’s going to take to pour into these companies with the needs they have right now. Is there any chance that you’d let Tom and his company have these?”

They said, “Absolutely. Tom, you take them.”

And he just kind of laughed and went, “What?”

I said, “Tom, here. Here are some new clients. Take them.”

At that point, we basically finished with our meeting, and the top senior vice president looked at me, and he said, “Earlier today, I asked you a question, and I was serious about it.”

He had asked me a number of questions by that point, and I said, “Which one?”

He said, “I asked you if you could teach my wife how to love me more.”

I said, “Well, I told you the answer, and I was serious. Your guys laughed at you, but I can teach your wife how to love you more.”

He said, “So, if I give her your card with your phone number and she calls you, you’ll talk to her and help her love me more?”

I looked at him and said, “Sir, I don’t ever need to meet her.” Then all of a sudden, his employees were laughing at him again. But the truth was, I didn’t need to meet her to teach her how to love him more. I told him I could show him how to reach out to his wife in ways that would help both of them come together in a more meaningful way in their relationship.